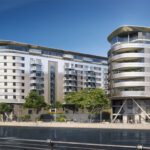 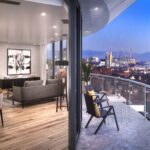 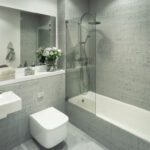 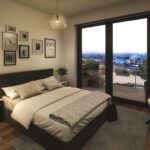 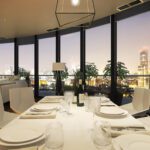 Previously dubbed as Manchester’s ‘hidden Island’ and laying untouched for years, we are delighted to be helping to breathe life back in to Pomona Island with the delivery of our 5 phase development – X1 Manchester Waters. The island, which was once home to the Royal Pomona Palace and Botanical Gardens later, became docklands to serve the Manchester Ship Canal. X1 Manchester Waters is a key element – and the first being delivered – as part of a 10 year master plan for the area.

Occupying the south portion of Peel L&P’s wider 26-acre Manchester Scheme, each tower will bring stunning waterfront apartments to the Island located between Castlefield and MediaCityUK. The location is truly unique and will offer residents stunning waterfront views along with excellent travel links to Greater Manchester – with the Pomona Island tram stop located just two minutes walk from the development. During one of his first outings as PM, Boris Johnson has pledged to ‘unleash the productive power of the Northern Powerhouse’ and visited Pomona Island as part of a visit for the new Trafford Centre Metrolink extension.
The new 5.5km line will extend the current Eccles line to the Trafford Centre, including 6 new stops with £350m of funding from the Government.

A LEADING BUY TO LET DESTINATION

With the population continuing its upward growth, Manchester City Council has estimated that the population will exceed three million by 2030 – with Manchester’s population in particular estimated to top half a million. Further insights from Manchester City Council demonstrate that the city centre is experiencing population growth 15 times faster than the rate at which new homes are being built. Research from Savills has shown that although there are 7000 new homes in the pipeline for Manchester over the next two years, to meet housing needs, a further 11,254 would need to be delivered per year to keep up with demand.

Residential Property values in Manchester have risen 5.1% year on year in the last 12 months according to the latest data from Zoopla and Hometrack confirms that Manchester remains the fastest growing City. By 2022, it is predicted that house priced will grow by 15.3% and rents will rise by 13.6% (4) Research from Knight Frank has confirmed the above through its indication that rental income looks to continue its growth with an overall rise of 14% by 2022. The same research continues with its predictions with regards to the private rented sector announcing that 25% of households in the UK will rent privately by the end of 2021.

You can call and speak with your expert Portfolio Manager on +44 (0) 207 097 5107 or if you prefer please fill out the enquiry form below and we will get back to you asap.

Speak to the experts


A striking new feature on the city’s skyline, Vision is Manchester’s most prestigious new luxury development and comprises 37 storeys of prime res...


At the heart of the proposed transformation of Trafford’s Civic Quarter – an ambitious masterplan to deliver 4,000 new homes and 5,000,000 sqft of...


Welcome to Fifty5ive, a vibrant and fast-paced community in the centre of Salford and Manchester which is perfect for those who want a life that goes ...

IMPORTANT: Please note that all assured rental returns are provided by the developer, no liability is taken for rental returns by Property Wealth Ltd. None of the properties listed on this website are approved or regulated by the Financial Conduct Authority and are not covered by the Financial Services Compensation Scheme. We recommend that Investors seek independent advice before making any investments.